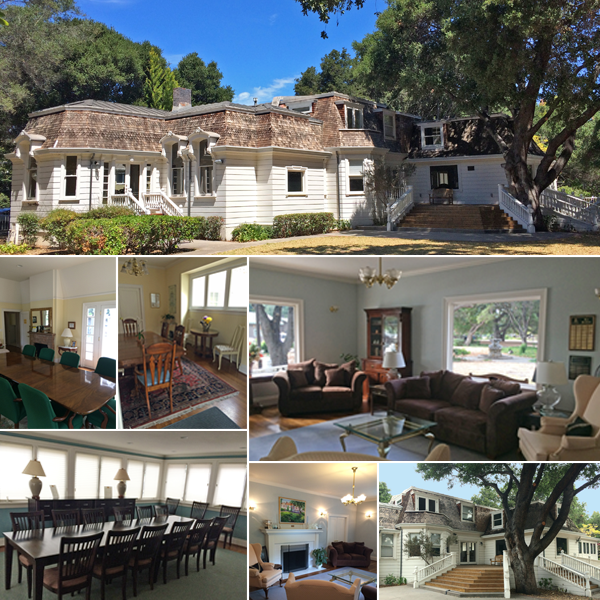 Host an elegant affair with fully furnished rooms perfect for a cocktail party or small wedding reception. The Gatehouse can accommodate up to 80 guests for a standing reception. Space for seated dining is approximately 15 guests per room in two non-adjacent rooms (historic living room and sunporch). Surrounded by the beautiful grounds of Burgess Park and overlooking a lovely fountain, the Gatehouse is an ideal spot for an afternoon party, luncheon or tea.

Funds from the rental of the Gatehouse help with the maintenance of this historic landmark.

A Brief History of the Gatehouse

The Barron-Latham-Hopkins Gate Lodge, or the Gatehouse, is the oldest existing structure in Menlo Park and the last surviving gatehouse in the state of California. It was listed on the National Register of Historic Places in 1986 and is important as a last remnant of the fabulous country estates that were built in the area during the 1860s and 1870s. 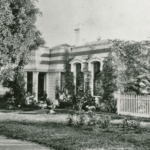 The Gatehouse was built in 1864 by William Eustace Barron who was a leading capitalist during California’s formative days. It was the entrance to a 280 acre estate that extended from the Caltrain Railroad tracks to Middlefield Road and from Ravenswood Avenue to the San Francisquito Creek. 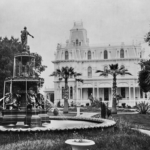 Milton Slocum Latham purchased the estate in 1871 for $75,000 and named it Thurlow Lodge. Latham turned the property into the most elaborate estate in California. He spent most of the Civil War in France and brought back many fine outdoor fountains that he placed around the property, including the one that still stands near the Gatehouse. Latham lost his fortune in the Depression of 1875. (Photo from the Menlo Park Historical Association) 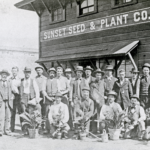 Mark Hopkins’ widow purchased the estate in 1883 and renamed it Sherwood Hall. When she remarried she deeded the property to her adopted son, Timothy Hopkins, as a wedding gift in 1888. Hopkins started Sunset Seed and Plant company on the estate grounds which grew into the largest seed business in the west. (Photo from the Menlo Park Historical Association) 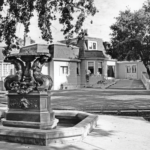 In 1942 the estate buildings were demolished except for the Gatehouse and its gate. It had been willed to Stanford University but by this point all of the buildings except the Gatehouse had become uninhabitable and the University sold everything. Universal Studios bought the disassembled mansion and stables for use as movie sets. The United States Army leased the Gatehouse to use as officers’ quarters during World War II. These officers worked at an Army hospital, which was where SRI now stands. The Gatehouse was leased as a residence until 1968 when it was purchased by the City of Menlo Park. Part of the building was leased to the JLPA•MP beginning in the fall of 1970. 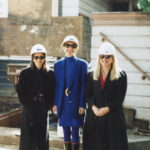 In March of 1996, the Junior League of Palo Alto•Mid Peninsula, along with the City of Menlo Park, undertook an historic renovation of the Gatehouse that was completed that August when the League became sole tenant of a wonderful and historic old building.